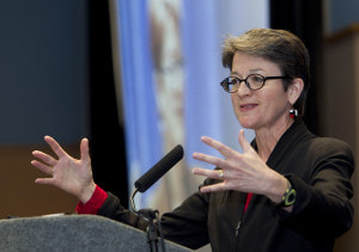 Bishop Sally Dyck, Northern Illinois Conference of the Methodist Church. Before entering the episcopacy, Bishop Dyck served as an elder in the East Ohio Conference, where she was a pastor and a district superintendent. She has served on the board of directors for the General Board of Global Ministries, was elected to the Central Committee of the World Council of Churches in 2006 and became president of the United Methodist Commission on Communications in 2008. She received theological training from Boston University School of Theology (M. Div., 1978), University of Geneva/World Council of Churches (graduate certificate, 1978), and United Theological Seminary, Dayton, Ohio (D. Min., Black Church Studies, 1989). Her upbringing in a Mennonite home instilled in her the understanding that personal piety is inextricably woven to peace and justice advocacy. She has co-authored a book: A Hopeful Earth: Faith, science and the message of Jesus.

Patricia J. Eggleston, Esq, Executive Director, Imani Village:  In order to meet the needs of our community and live out our call, Trinity United Church of Christ has embarked on a project called Imani Village. This development will be a beacon of hope in an area that has become accustomed to being frustrated by the lack of attention. Imani Village will be the first holistic, sustainable, and Green community sponsored by a faith-based entity in the City of Chicago. Imani Village represents a unique collaboration between the faith community, local government and business interests, to provide a model for urban planning and development that delivers a sustainable green infrastructure, jobs and job training, healthy urban lifestyle alternatives, and an optimized educational environment.

K. Rizwan Kadir, Inter-faith Presenter with Islamic Perspective: A firm proponent of servant leadership, Kadir believes in giving back to one’s communities. Over the last 10 years, he has served on several university and professional organizations’ boards. Since 9/11, he has been involved in inter-faith dialogs in the North Shore suburbs, and also worked on a project with the US Treasury’s Counter-Terrorism Unit to develop financial and governance guidelines for the US-based Islamic charities. Kadir speaks on financial and international topics at professional and media forums and has been interviewed and quoted by the Washington Post, and Voice of America, among others.

Dr. Mark Potosnak, DePaul University, Catholic Climate Covenant: An associate professor of Environmental Science & Studies at DePaul University, Mark Potosnak shares both his passionate Catholic faith and scientific understanding of climate change with the wider Church. As a Climate Ambassador for the Catholic Climate Covenant, he works to help Catholics recognize the impacts of climate change on the most vulnerable as well as what they can do to more fully care for God’s creation. His scientific research focuses on interactions between the terrestrial biosphere and the atmosphere. Specifically, he studies how trace gas emissions from plants affect atmospheric chemistry and how climate change will impact this interaction in the future. His field studies have been conducted in temperate, tropical, urban/arid, and tundra ecosystems. His research has revealed complex interactions between temperature, drought, carbon dioxide concentration and other global climate change factors. Understanding these complexities is essential for our ability to successfully predict the Earth system’s response to human stresses on the  environment.
​
Rev. Brian Sauder, CEO, Faith in Place: He grew up in Illinois in rural Tazewell County and received his B.S. from the University of Illinois in Natural Resources and Environmental Sciences, M.A. in Religion from Urbana Theological Seminary, and M.B.A. from the University of Illinois. Rev. Sauder is licensed towards ordination by the Mennonite Church U.S.A. and worships with Chicago Community Mennonite Church in East Garfield Park. He started the Central Illinois office for Faith in Place in January 2010, where he served as the statewide Policy Director for Faith in Place. Brian became the Executive Director of Faith in Place in June of 2014. He also serves on the Board of the Illinois Environmental Council and his work has been recognized as a 2012 award recipient of the University of Illinois's Business School's Community Scholar and as a 2013 Central IL Business 40 Under 40 winner.
Support Programs